Posted by steve.welsh@gmail.com in The Awful Truth On May 22 2014

A game that’s been recalled and retold by numerous Boro fans ‘of a certain age’. The 1988 play-off final against Chelsea is often remembered on Teesside with equal measures of creative license and hyperbole, so I thought it would be interesting to hear from the Chelsea side of the perimeter fence.

The author for this one is the excellent Tim Rolls, who writes regularly for the CFCUK fanzine and who’s personal blog Plains Of Almeria is definitely worth making some time for.

It’s the 23rd January 1988. Chelsea have just eked out a dreadful 0-0 draw with Portsmouth, in front of 15,000 disillusioned and bored fans. My friend turns to me as we leave the ground and says “We’re going down”. On the face of it an absurd statement given there were still 15 games to go, they were still 13th in the table, and there were plenty of poor teams in Division One that season. What was slightly different was that on top of the 3 teams relegated, the4th bottom had to go into play off with the 3rd – 6th placed teams from Division Two.

Fast forward just over three months. Following a run of one win in six months, and the replacement of hapless manager John Hollins by Bobby Campbell, Chelsea were now 18th and were destined for the playoffs unless they beat Charlton, who if they  lost would go into the play-offs themselves. Despite taking the lead through Gordon Durie, Chelsea sit back and let Paul Miller hit a deflected equaliser. Tactically inept and impotent, Chelsea huffed and puffed but failed to score.

So Chelsea were forced to enter the play-offs. In the semi-finals Chelsea comfortably disposed of a mediocre Blackburn team, beating them away and at home, setting up Middlesbrough in the two-legged final.

For the midweek away leg I couldn’t go to Ayresome Park (work or money, I forget which) so was forced to watch the game in a cinema in Central London. Chelsea defended ineptly and lost 2-0. Watching the game on screen in that way was a strange experience – some cheering and chanting but very self-consciously and generally a very odd feeling – not part of the game at all. There was also a showing at Hammersmith Odeon where Chris Quentin (aka ‘Brian Tilsley’ from Coronation Street) who was apparently a Boro fan, had to leave hurriedly after being spotted. I went home frustrated, partly at having to watch a game at the cinema (for the 1st and last time) but mainly because I knew we were in real trouble.

Friends of mine had missiles thrown at their coach that night, fans were attacked getting back to their cars and a lot of Chelsea fans were sufficiently wound up by unpleasant experiences in the North East that evening to guarantee that the 2nd leg, three days later, would be a charged experience. Chelsea needed to win by two goals to take the game into extra-time but given their inability to keep clean sheets (only four since mid-October) they were clearly massive underdogs.

There were 40,550 at Stamford Bridge that afternoon, Chelsea’s biggest crowd of the season by some 5,000. I think Boro must have taken 4-5,000 but I am sure some reading this will have a better idea of their turnout.

Chelsea had some good players that day including Tony Dorigo, Pat Nevin, Kerry Dixon and the occasionally-fit Gordon Durie. The defence was slow, though, and contained three central defenders.  There was also a lack of midfield creativity, with far too much reliance on Nevin’s trickery, with Mick Hazard out of favour for the final, key, games that season. I don’t remember there being much confidence among the fans before the 2nd leg, and many were pretty much resigned to returning to Division 2 after four seasons in the top division.

Having queued to get in (a fairly unusual experience that season), as ever we stood in The Shed, the historic home terracing until 1994 – Boro fans were up the other end, on the North Stand terracing.  It quickly became clear that the atmosphere was going to be extremely hostile. A group of Boro fans had been put in seats the West Stand, but close to The Shed as opposed being next to the away fans. They soon became targets for abuse and I think a number got moved to the away terraces.

Looking at YouTube film of the game, Chelsea hit the post, then Boro did, then ‘Juke Box’ Durie put Chelsea ahead after 18 minutes.  After that, it’s probably fair to say that Chelsea simply weren’t good or clever enough to break down the Boro defence, despite having a few chances.  One memory I have in the last few minutes is of Mick Hazard, who wasn’t playing, walking along the touchline trying to exhort the team to greater effort.

At the final whistle, as the Boro hordes celebrated, the atmosphere turned ugly, very quickly. Many Chelsea fans just stood there in various stages of disbelief and gradually drifted away but a fair number attempted, and succeeded, to get on the pitch to front out the Boro fans in the North Stand (who were behind fences so probably perfectly safe). Given there were fences up at Stamford Bridge, it was never clear how so many got through the supposedly locked, and stewarded, narrow gates from The Shed to the pitch area.  Others joined in the invasion from the seats.  We just went home, totally depressed, as sporadic incidents took place inside, and possibly outside, the ground.  I don’t think the massed ranks of celebrating Boro fans were attacked, but it must have been a major effort for the police to get everyone away from the area safely.

The pitch invasion, which at the time didn’t seem that bad to me but then I’m possibly biased, was the final straw for the football authorities after other incidents in recent years and Chelsea got heavily punished.

The first five home games the following season were all-ticket, with no sales on the day, no terracing open  and away fans banned (which, given the reasons for the ban, seemed perverse).  Chelsea started that season slowly but ended up winning Division 2 by a country mile, with a rejuvenated team, and have been in the top division ever since.  I’ve just looked up Boro’s performance the following season – they were unsurprisingly relegated but given they almost went out of business in 1986 it is amazing they ever went up in the first place.

A few statistics show why Chelsea went down. 2nd in September but only one win after October.  51 away goals conceded. Eleven home draws. Two away wins. Despite nearly avoiding it, looking back it is hard to argue that Chelsea were unlucky to be relegated.

Mind you, those Boro games (on and off the pitch) meant that the 1990 Full Members Cup Final (meaningless but still nice to win 1-0), the 1997 FA Cup Final and 1998 League Cup Final all had an extra edge to them from a Chelsea point of view. 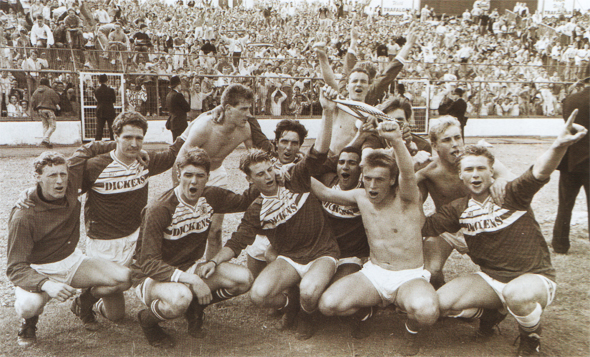 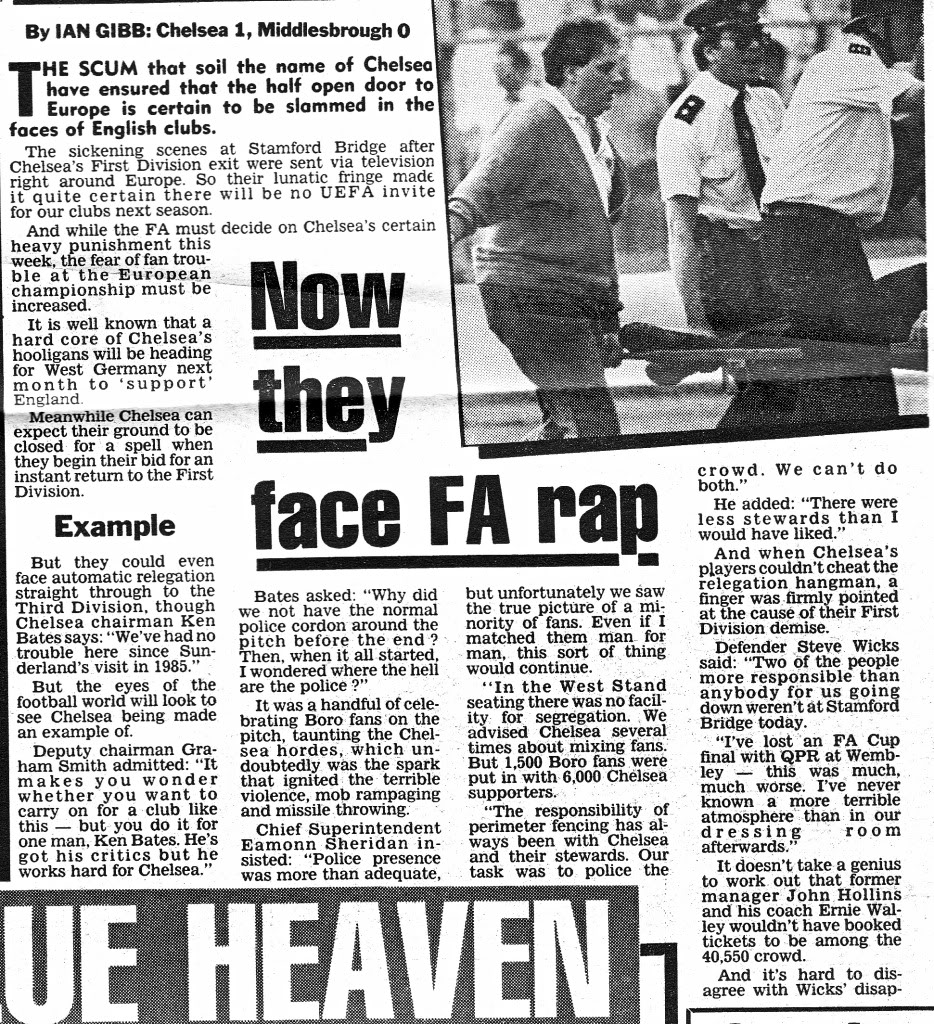