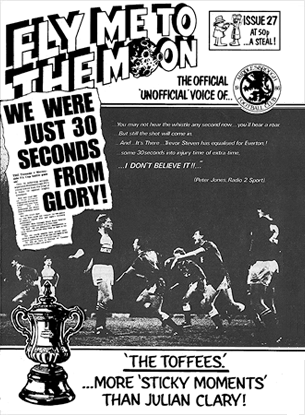 Lies, damn lies and that Evening Gazette survey. Some very naughty rumours are doing the rounds in the Holgate just at the mo. It appears that some fans are actually quite upset with the present board-room leadership at our beloved club.

Fly Me to the Moon do not think the present board are insensitive, uncaring or incapable of listening to the fans option. That kind if opinion is utter rubbish, let’s face it this board has the true interests of us poor people at heart. These whingers on the terrace (obviously the product of broken homes or Guardian readers) are the real cancer in football. Just because these people turn up every week, pay their money and stand in the sort of conditions that you wouldn’t put a Vietnamese Boat Person in, doesn’t mean they actually have a valid opinion. Good grief no.

Keith Lamb is a superb businessman and true leader in humanity. I well remember him scoring the winning goal for England in the 66 World Cup. His cure for piles has been one of the finest gifts to mankind. It is a little known fact that his father is the deposed King of Albania and a breeder of championship winning seal pointed hamsters.

The only possible replacement for Lamb would have to be that littery genius McQuade of Ayresome – post to the court of King Bruce.

The sooner we get the full membership scheme in place the better, then we can see the implementation of a proper anti-hooligan policy, the birching of people wearing bobble hats, public crucifixition for those not sitting or using naughty language in the Holgate End etc. 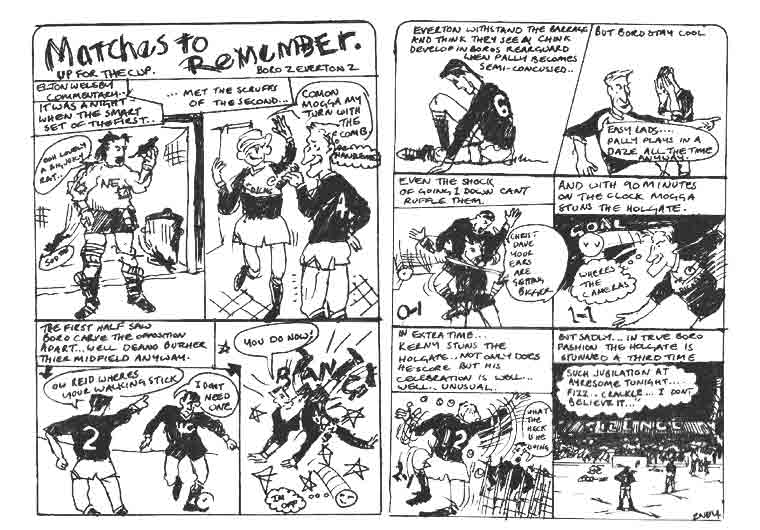 So they say Ayresome’s going all-seater and you’ll have your own opinion on this contentious issue. Of course it took a near-disaster to force this decision which must have broken the hearts of the pin stripe boys, lower capacity equalling less profit. Mind you, the prices they’ll probably charge should offset it nicely. In fact while they are at it they could do a bit to improve the appalling facilities. Turning the empty corner into a properly equipped section for the disabled would make us the envy of the whole league. An improvement in the catering would also not go a miss, at the moment there’s more empty space in the pies than there are on the terraces.

Now there is a solution to all these problems and before you throw up your arms in horro, its only hypothetical and will never happen. Move the ground. This is the sort of thing that is now happening in West Germany, they are moving stadiums out of the city centres.

How much would it cost? A while a go there was an article in the Guardian by an American who specialised in building stadiums, giving credit where its due, if Yanks are good for nothing else, they do build some impressive stadiums. This bloke reckons he could build a new ground for even lower division clubs for around £1.5 to £2 million.

Could we afford it without using the Pally money, which should really go towards strengthening the team? After all it’s no good having a flashy ground if the teams crap (right Newcastle?) We would have to rely on some kind hearted sponsors. Although the sale of the prime inner-city land now occupied by Ayresome Park would off-set it a bit.

Where would it be located? Rumours have been about for a while suggesting the old Stockton race course, but what about the land that used to belong to the B.S.C and Smiths Dock at Cargo Fleet? It has already been reclaimed in part as a motor-racing track and it has had a large amount of money promised by a certain entrepreneur.

It would be nice if someone with footballing interests would turn up!

What are the advantages? Well we would have a spanking new ground with all mod-cons. The railway line runs alongside the site. Football specials could pull straight in and away supporters would not have to be herded through town. A coach park could also be built. It would be well out of the way, this would come in handy when that little prat Moynihan gets his way with ID cards. It would be built with the type of turnstiles required and when one breaks down, as they no doubt will, there would be no ugly crowd scenes in the town. Can you imagine the chaos down the alley on the Ayresome street entrance to the Holgate if the computerised turnstile blew a chip?

What are the disadvantages? It’s a bloody long walk from the “Yella”. Anyway, it will never happen, so the landlords can rest easy. 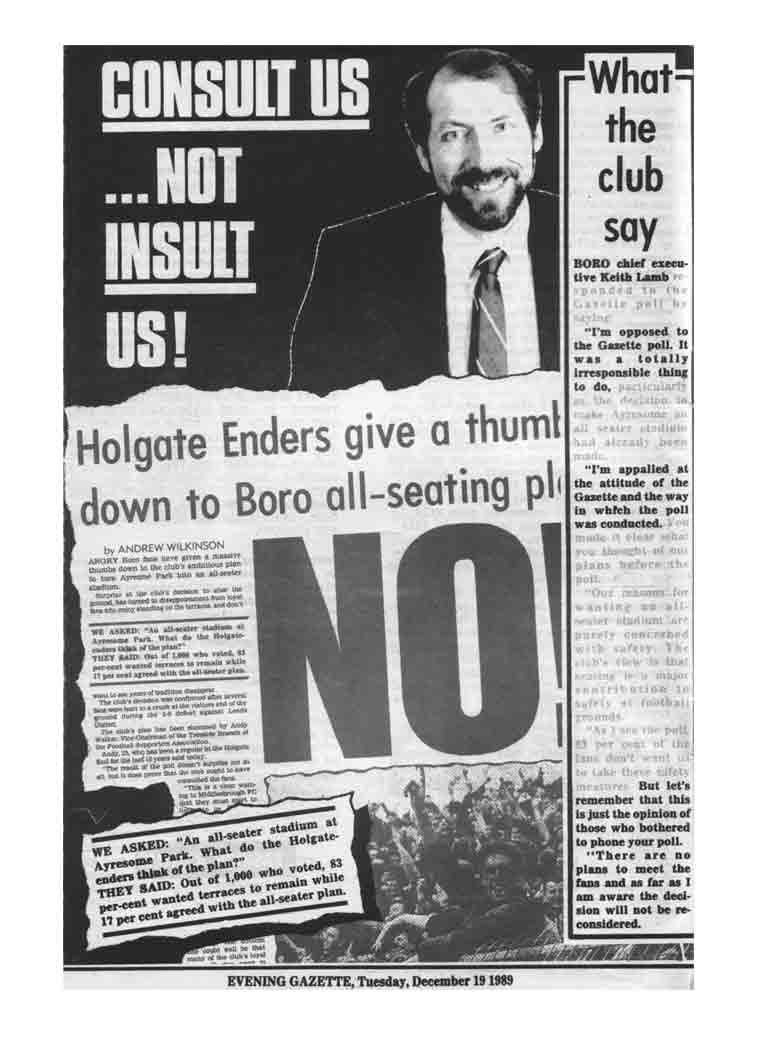 The Boro Stiffs suffered a cruel blow last week with the loss of their Messiah and all round good guy Gary Gill, when their super skipper decided to opt for the wilderness of Feethams as opposed to the Ayresome Park exclusion zone.

Gill completed his surprise transfer just in time to make his debut for Darlo against Vauxhall big boys Chorley and the Wheelies. But Gilly, a perennial substitute for the Boro last year was once more asked to sit it out on the bench until ‘Little’ Brian decided that the only way Johnny Borthwick was going to score was if he hung a carrot from the goal posts, but without a carrot about his person he turned to his next best option and put Gilly on.

The crowd went wild and the Great Gary Gill responded in true ‘Roy of the Rovers’ style by creating the opening goal. Darlo went from strength to strength and with Gilly revelling in the company of ‘fellow fashion’ victims Toman and Hine it was left to speedy veteran Emson to sew up the points with two late goals. 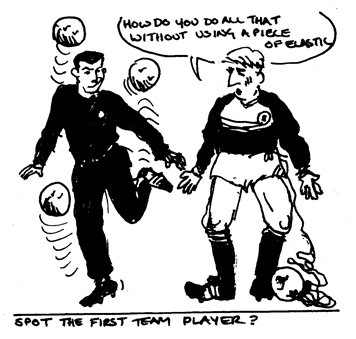 Meanwhile the Boro reserves, less their influential trendsetter took to the field against the Mackem and Tackem second string, with Danny Holmes stepping into Gilly’s nifty boots – Holmes, the nephew of Bruce is the most outstanding of the present reserves side, possessing a siftness of thought and action that his mentors in the first team have often lacked this season. If he had a little more support than that offered by Crosby and Tucker the 0 – 0 score may well have been tutned into victory.

As regards first team promotion however, Holmes is still very inexperienced with only a handful of reserve games behind him. Perhaps last Tuesdays game however, has pushed Paul Kerr, Nicky Mohan and Owen McGee nearer consideration. Of those three both Mohan and McGee must be breathing down the neck of out of form Gary Parkinson who suffered more than most along with Colin Cooper due to the failure of the midfield to realise the responsibilities against Stoke City.

Kerr may well be the answer to our midfield problem, a problem that Stuart Ripley was unable to cope with on Monday night. Kerr’s pace and deft touch might create the space that Brennan and Proctor both need in order to play to the best of their abilities, which when you look at them, are fairly limited. Neither are what you might call ‘fleet of foot’, Brennan at least can provide the killer ball from time to time i.e. the one that loops over the central defenders and falls inside the full back, but he needs an anchor alongside  him who can do his bidding and create space. Proctor appeared against Stoke to have neither the ability nor the inclination to do this.

Whilst the majority of the crowd shamelessly booed Parkinson and jeered Cooper every time they got the ball, few noticed the lack of invention from the midfield that put them there, on the ball, deep in their own half and under pressure. The same midfield, hardly bent over backwards to get it back either. Hence we had no prolonged spells of possession (hardly 3 or 4 passes strung together) no pattern and no real chance of breaking down a 10 man defence.

Its worth remembering that even though we were pretty appalling we still could have won comfortably, thanks in part to relentless long balls and Stoke’s goal being the jammiest seen at Ayresome since Chapmans for Notts Forest last season, coming from there only attack of the 2nd half. 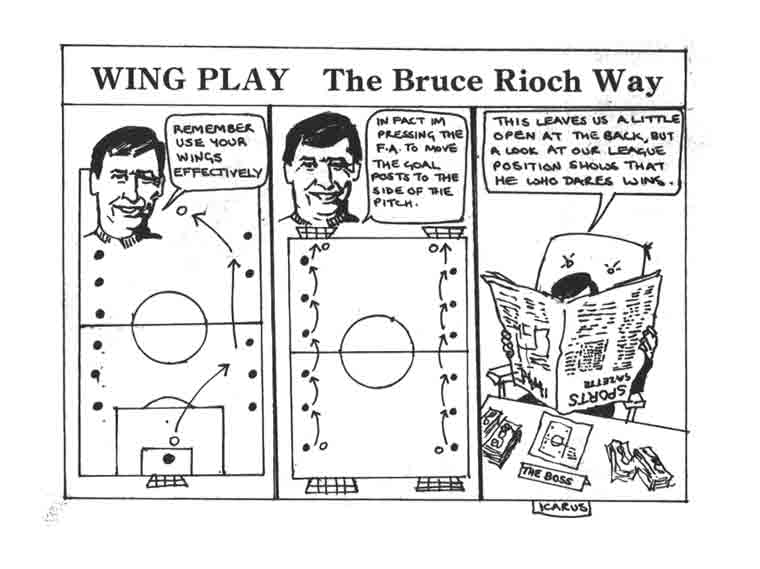 It seems strange that only 5 days after the problems of the Boro vs. Leeds game the blame seems to have switched from the club officials and police and all the difficult questions glossed over. Instead the blame has fallen on “the scum, hooligans and thugs”. So after half a dozen minor incidents we’re told by our Chairman that if the sfety of the people could not be guaranteed at Ayresome Park then there was no place for football on Teesside and that the ground would soon become all-seater. It’s all well and good for Henderson to talk about safety and improvements, but can he even see the disabled fans stuck out in all weathers from his Directors box and has he ever used the bogs behind the Holgate?

As for safety, has he ever tried to get out of the Holgate on a match day? First battle your way out and down the pathetically narrow exits and stairways, then squeeze down the alley picking your way through the horseshit, dustbins, potholes, puddles, cobbles and rubbish. Then dodge the parked cars and flying police cars in Ayresome Street. If all that isn’t hard enough, do it in the dark. There isn’t one light at this part of the ground. It only takes one person to slip and someone at the back to push and we all go down in the shit together. What would police and officials say about that? “Close the Holgate, landscape the terrace.” All that is needed is a couple of lights and a bit of tarmac.

And what of the proposed ground improvements? In the past year we’ve had sell outs on several occasions in a season which saw us relegated. Imagine what it would be like trying to get a “seat” if we ever had a good cup run or success in the First Division. Surely the ground should be made bigger if the problem is overcrowding now that fighting and pitch invasions have been eradicated inside the ground. By making the capacity smaller you exclude a large proportion of your existing following. You then have to increase prices to compensate for this loss. So the people who lose out are the unemployed, the disabled, pensioners and the lower working classes.

So Thatcher’s shoe shine boy will have his way. A game that has depended on the money and support of the working man and woman for a hundred years will lock out those who can not afford to pay. We in the North East have not had much to shout about in recent years but it is through our football that we show our pride and love for this area. That is why i fear these sweeping changes brought in time and time again will kill football and kill the team i love.