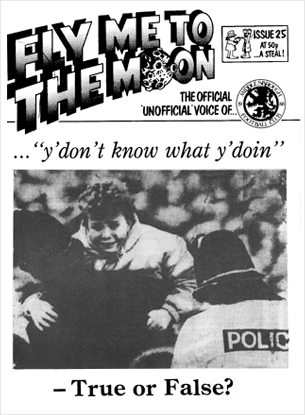 Get ready for the whitewash! Well what a shock, our loving and caring club (sounds like the Co-op) have put the blame where blame is due. Of course the fans were to blame for the injuries at the Leeds game. I mean the idea of fans being boisterous and jumping up and down must have never occurred to them. Aren’t we lucky that the brave lads in blue came on the scene just when they did to sort things out in a speedy and efficient manner.

Like hell they did: From the Holgate it looked like no one had any idea of what was going on. They, the police, appeared to have simply got it wrong and put too many fans in too small an area (ring bells for those at Newcastle in the First Division season?)

When are we the fans gonna’ get some respect from clubs and the police (answers to that one please). We stand on crumbling terraces, piss in Victorian bogs, get served revolting food, are barred from pubs and service stations, get treated by the media as utter scum and given the most intimidating treatment possible by police both home and away (welcome to prisoner cell block Luton) and the club still expect us to take the wrap when they screw up. Can you imagine being frisked when you went to the pictures or asked for ID at a concert?

Clubs derive the vast majority of their income from common working class punters like you and me. Clubs give the best treatment to the mega rich parasites who pay for the odd match ball or put an amount of money into the club that pound for pound comes to no where near meeting the amount a season ticket holder will put in over a lifetime of watching the club (in terms of percentage of income). Middlesbrough 1986 Ltd was saved by the fans who put in the real money week after week through the turnstiles.

The club needs to get its act together and start treating the fans (visitors included) as adults, giving them a decent standard of service all round. If not, eventually the fans will get so hacked off being treated as scum that they will stop going to the matches, buying the programme, shopping at the club shop and wasting the time of the poor unfortunate bunch of Dimblebys who protect us from disaster (oh thank you Chief Inspector for your dedication to the publics safety!)

Too Good to be Forgotten 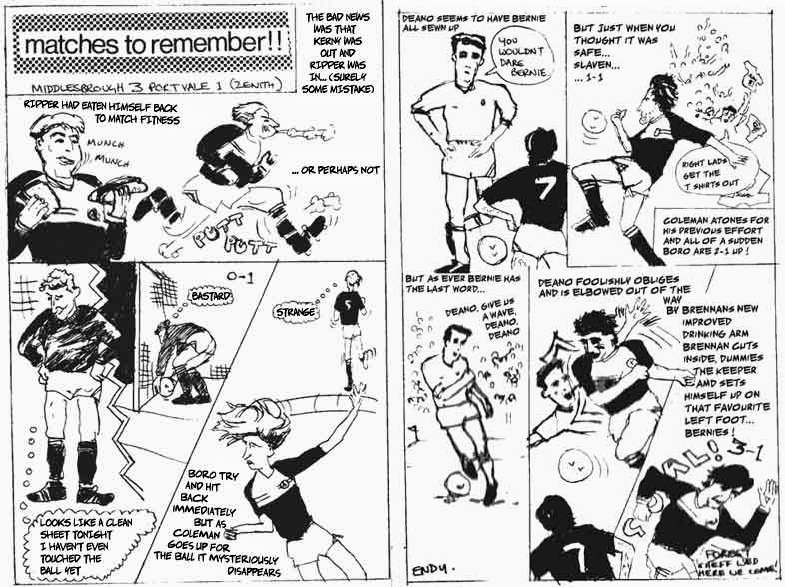 When Will They Ever Learn

Stepping from the train at Middlesbrough to attend the inaugural meeting of the Teesside branch of the FSA, my eye was taken by a newspaper seller’s poster “Fans to blame – say Boro bosses”. As a fan myself, I bought a copy to investigate further, where upon my worst fears were confirmed. The cosy arrangement between club and police had already held trial over the previous Saturday’s terrible incidents with the accused not even told they had been found guilty and duly sentenced.

But hadn’t I been here before? Perhaps some former life, or parallel universe? Didn’t this nightmare sound familiar? Fans pulling down fences, trampling over each other, robbing motionless bodies, urinating on them, running riot and leaving happy that 95 of their friends had died?

In fact, weren’t all fans drunken scum of the earth and shouldn’t this ‘workers game’ be banned? Then along came the crazy Lord Justice Taylor and said that he wanted to hear the fans side of things. Then someone dressed up Trevor Hicks and called him a Company Director, he told how he and his family went to the match but two of them had died. LJT listened and decided that it wasn’t the nasty fans fault but the police and the officials. However, it wouldn’t happen again if we made changes to ensure safety and we would all live happily ever after.

So we all lived happily (even though the police still blamed the fans), until the 9th of December 1989 when our nightmare returned. The fans decided to crush each other, forcing fathers to impale their sons on spiked railings and everyone went a bit mad.

The police and the club decided that the fans were to blame because the club had failed to listen to LJT and put proper barriers in the pens. What sane father would have brought his son to a match where he knew the terracing was unsafe for youngsters. It was of course the fans who failed to print warnings on the tickets as LJT demanded. It clearly showed fans have less intelligence than lemmings and only go to matches to endanger the lives of their offspring.

Of course it was the fans fault, as happened at Sheffield the police and the club got in first to tell the press exactly what happened and they wouldn’t lie would they? If there is one thing they learnt from the Hillsborough enquiry, its if you do lie, don’t get caught. Lets hope that the not so nutty LJT returns and proves once again that the fans are being blamed for the faults of Directors and inadequate policing.

It was in those lazy, hazy days of summer when the First Division seemed just a season away that the name of Alan Comfort was first connected with Ayresome. As this was in the Sunday People I didn’t take much notice but when a couple of days later his picture was splashed across the Evening Gazette with an Eric Paylor article underneath I began to suspect that there might be a grain of truth in it after all. Two weeks later and Al was shaking hands with Mogga Mowbray under the North Stand. At £200,000 he didn’t exactly appear a snip for a Fourth Division winger who was released by Q.P.R in his youth but at least he proved a useful addition to the squad replacing the loss of Mark Barham.

His first appearance at the Central Avenue ground, the Bernabau of the Northern League, against Billingham Synthonia – Terry Cochrane and all (although David Shearer was thankfully missing). He hadn’t been able to make the starting line-up but with 10 minutes to go and only 6-0 up he was introduced at a crucial moment in the game. His first match left a lasting impression – he tripped over the ball and fell flat on his backside – but the next 10 minutes went by in a blur although i do remember thinking how much in style he looked like Slaven, even though this was from the other side of the ground and through a clump of bushes. It was at York below the famous Cathedral, that saintly Al made his full debut, albeit in another friendly. The game finished 2-2 and Comfort showed himself to be a tricky performer, an old fashioned orthodox winger who wasn’t afraid to shoot when the opportunity arose.

As the first day of the season drew closer many thought of Comfort as a fringe player, but obviously he had convinced Rioch of his ability (it had been rumoured that Comfort was very much Todd’s signing and had been cold-shouldered by Bruce) and so he took to the field ahead of both Ripley and Burke, the latter of whom had really impressed during pre-season. 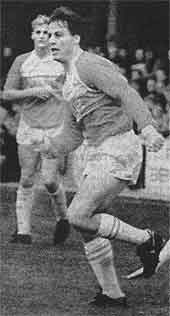 Comfort soon impressed his audience, responding to an unfamiliar 20,000 crowd at Wolves. He provided an endless stream of crosses, one of which led to Davo’s goal (yes, his only goal). Then against Leeds he first showed us his shooting prowess with a first time cracker from 20 yards.

Where once Ripley had provided that thrill of excitement when he got he ball at his feet, now Comfort made the crowd get up on its toes. Against Barnsley his game reached new heights, this was old fashioned wing play at it’s very best, after 5 minutes he had two men on him but it was a case of the more the merrier as Comfort toyed with his opponents. Each time he received the ball he would feign to come inside and then at the last moment he would wheel away to the bye-line and pull the ball back. Unfortunately with Kernaghan stuck in defence our attack lacked a centre forward and we had to rely on Burke’s late equaliser to save a match we should have won my a country mile. Alan had set himself a tremendous standard to live up to in those early days and it was of little surprise when after the Barnsley game he seemed to go off the boil. Nevertheless he continued to be positive, never shying away from taking on his full-back and even if he wasn’t dazzling his crosses were still providing plenty of opportunities in the box.

Alas, against the Geordies it all came to an abrupt end, a freak twist when his studs got caught in the ground as he tried to turn, sent him crashing to the floor in pain. The geordie fans hooted at the improbable injury regarding it as time-wasting but those of us who knew Alan realised that something was badly wrong. Now, a month later and Comfort is still awaiting an exploratory operation. I hope his recovery will be swift and that those darting runs down the wing will enthral this spectator once again. Although there’s a chap called Davenport playing quite well in that position at the moment, problem is he doesn’t score as many goals.

New in the Club Shop

The perfect Christmas gift for the young Boro supporter, your favourite Boro stars as cuddly toys…

From The Directors Box By Sir Ted Bufty Tufton

First of all i didn’t want to write for this ridiculous working class rag that you lot happen to read. In fact if my accountants (Tax, Fiddle and Dodge) hadn’t told me that i need a few quid in order to keep my East Samoan investment portfolio going i wouldn’t have bothered!

Anyway, let me just say what a brilliant year 1989 has been for the Directors, despite dropping from the First profits have been as good as ever, thanks to advice from my trusted lawyers  (Messers Sue, Garbbit and run). I’ve managed to make a simply huge slice of cake from the masses. The tie up between the catering at Ayresome and my subsidiary company (Anglo-Australian Pet Food Importers) has been splendid and by avoiding any ground improvements, licks of paint excluded, we have a huge stash in the bank. Ha, ha, ha. 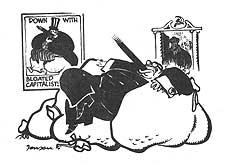 I was very disappointed with the Pallister sale. I knew we should have stuck out for another hundred grand. On the signing front, forget it. When you show me a striker who can earn 10% tax free in a Swiss savings account, I’ll still say no! Ha, ha, ha.

I look forward to the introduction of the ID card scheme. Anything which keeps you uncultured working class yobs out of my Superstore Development, sorry, out of my ground, is good news. As I said to Margaret the other day, “Here’s fifty grand for party funds your supreme ladyship”. Bless me Harrods wellies, know what she said to me? “Oh Ted, how kind, here’s an MBE in the New Years Honours list and yet another cut in Social Security”.

Well I’ll finish at this point, I’d just like to say a Merry Xmas to all but I won’t because your all terribly common, instead i’ll go and evict a family of five. Ha, ha, ha.

Rumour has it that Sir Ted Bufty Tufton enjoyed writing this so much he may well be tempted to write again, as long as the right ‘incentive’ is there of course.