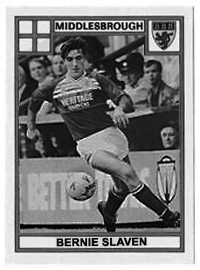 I recently had the opportunity to pitch some questions to perennial fence jumper and goal scoring legend Bernie ‘Wolfman’ Slaven. Generously taking time out of his busy schedule Bernie provided me with my most frank interview to date. Never one to shy away from a question, we covered a broad range of topics including his contract negotiations, managerial differences and the Bermuda Triangle!

1. After leaving Morton early in your career you effectively quit football for a period of time. How close did that come to being a permanent decision?

I only quit football for a short period after leaving Morton. I had no intention of chucking it in permanently. I wanted to prove a few people wrong.

2. I recently spoke with former Albion Rovers (who Bernie signed for) Chairman Robin Marwick who asked… “Given his ability, how could he have voluntarily kept himself out of the game?” How do you respond to that?

When you feel you are being mistreated by an individual or a company i.e. football club, the only way to rebel is to not sign a new contract and don’t train with them.

3. After refusing to sign a new deal with Albion, you were eventually persuaded to write to the majority of Scottish and English league clubs asking for a trial. Having burned your bridges with Albion, had you considered what might happen if no offers came in?

I didn’t have a plan B. I would’ve rather have been thrown to the lions than return to Albion Rovers. Regarding the burning of bridges, I had scored 31 goals and finished Scotland’s top scorer. The contract i refused to sign was on the same money as before, how can that be classed as burning bridges? You only sign a contract if you’re happy.

4. Following your transfer to Boro, what were your initial thoughts when relegation was followed by liquidation so soon after joining?

Ultimate nightmare, joining Middlesbrough I was sampling full-time football for the first time. I had trebled my wages and here I was in a relegated then liquidated team. I would love the modern day player to go through what I went through, they might appreciate what they have today.

5. Do you think your ambitions have ever clouded your judgement during your career?

If I had to do it all again, my ambition would be to move to a bigger and better club. I should have moved after finishing third top scorer in the top flight behind Smith and Aldridge. I found the longer you were at a club the less appreciated you became.

6. Obviously your goals played a huge part in lifting the club back through the Divisions. But did you consider yourself more than just a goal scorer for MFC? If so, what other attributes do you think you brought to the team?

I had a good left foot, good first touch, could beat a man and cross a decent ball, create and score goals. I like to think I was a footballer.

7. Which team mate provided you with the best service during your time at Ayresome Park?

There wasn’t one in particular, Comfort, Ripley, Hendrie provided the service, Baird and WilkInson took the weight off me. Everyone played a part.

8. What proportion of your goals would you say were a result of good service and what proportion were individual or opportunist strikes?

There is no doubt the majority was down to good service, without quality deliveries into the box you don’t score goals on a regular basis. Now and again I would produce my own bit of magic, but not regular.

9. Who was your ideal strike partner and why?

It has to be Ian Baird, big, strong, aggressive and vocally good, he used to say to me when I was dropping too deep “you push up wee man I will sort these four out” and he did. He was exactly what I needed the total opposite of myself.

10. Similarly which strike partner did you find most frustrating and why?

The most frustrating partner? I didn’t have one, If anything I was the most frustrating, I would take the huff, verbally have a go at team mates and get caught offside regular and I would have my say in the dressing room. I played with so many strikers and every one of them had different qualities.

11. After our return to the top flight under Rioch, Peter Davenport was often accused of disrupting the harmony of the team. It is generally assumed his big transfer fee and wages caused jealousy and bitterness within the squad. How much truth is there in that assumption?

It wasn’t Peter’s fault, as a player you take what’s on offer but the local lads who had worked their arses off to get from the ashes to the top flight never really earned the rewards they deserved. When Dav arrived he signed for £750,000 a club record on the pitch and was given the keys to a brand new XR3i Cabriolet. That for me rubbed the players up the wrong way, caused a bit of friction, some of our lads were still running around in bangers despite being in the top flight.

12. Post relegation you secured your own improved contract having discovered how much Gary Pallister had been on, prior to his own transfer to Man Utd. How difficult were those negotiations without an agent and what would have happened had your demands not been met?

If my demands were not met I was off. Negotiations were not difficult, I didn’t need an agent, I was vocally confident and capable of grinding out a new deal. I knew I was behind one or two regarding wages, as a top scorer for several seasons I found that disturbing.

13. Speaking of Pally, can you take us though the night you ‘escaped’ from a London hotel the night before a trip to America? Mark Burke tells me that all he remembers is Pally coming downstairs to announce “Bernie’s Gone!”

It was a trip to Bermuda that I went AWOL. I had asked for valium on the way down to London and didn’t get it. I didn’t sleep well at all during the night and when I heard Pally snoring, I just disappeared into the night and jumped on a train back to Teesside. People think it was my fear of flying that stopped me travelling but they were wrong, it was the Bermuda Triangle!

14. If you could only be remembered for one goal, which one would it be and why?

Several important goals come to mind but the one that gives me the most satisfaction was my goal against Chelsea at Ayresome Park in the play off finals. That goal took us from 3rd, 2nd to 1st in consecutive seasons. It was scored at the Holgate End and it turned out to be the goal that took us back into the top flight.

15. Ian Baird is quoted as saying “I played alongside three strikers: Bernie Slaven, Micky Quinn and John Robertson. Between them I think they took about six years off my career because you had to do all their running for them.” Is that kind of criticism unavoidable if you are perceived to be a ‘goal poacher’? and is it fair?

Regarding all the running, if the fans paid to watch the team during the week training, they would have seen a player who worked his backside off. I was always in the top 3 in the long runs and I was as fit as anyone. When it came to match day, I kept my energy for the box, that’s how I scored goals regular. No one talks about the miles you have run when you’re finished.

Speedie wasn’t interested as he was on the losing team. There was no fight for the ball. I just picked it up and put it in my bag.

17. Tell us how your signature fence jumping celebration began?

There was no plan to jump on the fence, it just happened. I guess it was all the adrenaline taking over and it was the closest I could get to the fans and share the moment. I was warned over the years by the police etc about my goal scoring antics but it never stopped me. I love players who celebrate a goal that’s what its about, that’s what fans pay their money to see.

18. How would you describe your working relationship at Boro?

I don’t have a working relationship with the Boro. I am a ex player and a pundit and have always had strong opinions. No regime will ever change that.

19. Do you think being outspoken mostly worked for or against you during your career?

20. Some fans perceive you to be too critical of the club and its players, how do you respond to that?

I cannot portray everything to be rosy if it’s not. I am paid to give my honest opinion. I am not employed by the club and my job is to paint a true picture to people that listen. I would rather not have a job than say what other people want me to say.

21. In June 1991 Colin Todd put 11 first team members, including yourself, on the transfer list. Given his own exit soon after, what was you interpretation of events at the time? Genuine threat or parting shot at certain individuals?

The players were aware that there was going to be changes. It was Toddy or us for the chop.

22. His successor was Lennie Lawrence, another manager you didn’t always see eye to eye with. What was the main source of friction that existed between yourselves?

The source of friction was a clash of personalities, Lennie didn’t have any.

23. Had it always been your intention to finish your career at Middlesbrough? If so, could you have done anything differently to ensure that happened?

In a nutshell I was forced out, my loyalty, appearances and goals were swept aside and I was gone. It was astonishing how Lennie was allowed to get rid of me, we only had one recognized striker in Wilko and no back up. But I can always say I joined Boro in the Second Division and left them in the Premiership.

24. I went to your testimonial in 1996 and found the attendance as surprising as it was disappointing. What do you think were the main reasons behind it?

I can only assume that Clayton Blackmore was a greater player for Middlesbrough than I was, he got 21,000.

25. Is there a modern day player (from any team) that reminds you of yourself?

None whatsoever, you don’t see many with a quiff.

26. Now that the focus at Boro is back on youth instead of the chequebook, which of our current crop of youngsters catch your eye the most?

Bennet and Williams are the pick of the bunch, both talented and confident. Youth is our only way forward as we are cash strapped.

27. Why have Boro found it so difficult to produce a home grown striker over the years?

When you look at the history it’s littered with Boro talent Campsell, Clough, Fenton, Mills all scored over 100 goals for the club. I don’t know the answer but I will never be convinced about academies until we unearth one of our own.

28. Why has Mogga succeeded (so far) where Strachan had failed?

He has settled the team down, encouraged them to play football, man managed them and instilled confidence, made the environment more relaxed at both training and match day.

No but I would love one.