Prior to this years World Cup I was commissioned by the BBC to create the artwork for their coverage of the event. Each piece was hand signed by the players themselves during their final training camp and captured as part of the regular Match of the Day show as well as MOTD Kickabout. During the ENG vs ITA game my work was seen by over 15 million people in the UK alone. 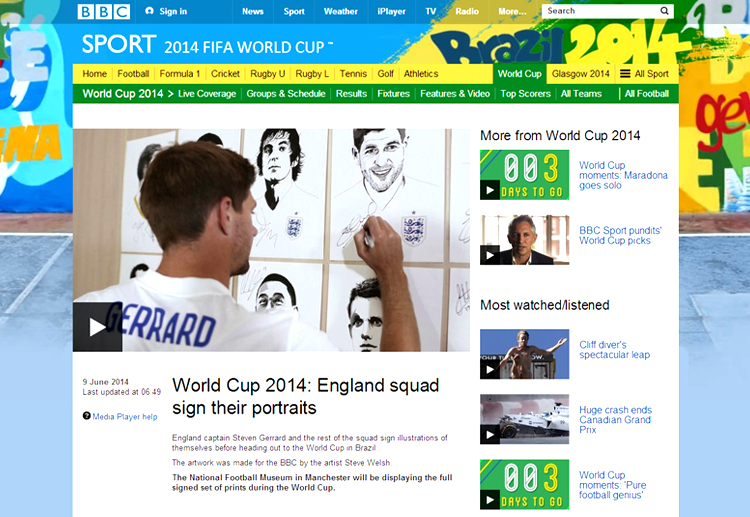 In the final months of his life, Everton Legend Dave Hickson sat down to record his life story, from being scouted by the legendary Dixie Dean to playing in front of 70,000 plus crowds. I was extremely proud to be asked to design a limited edition cover for his book which also features the work the work of artists Paine Proffitt and Zoran Lucic.

I was lucky enough to see my Maine Road print take centre stage on the official Umbro homepage. My work has been featured by Umbro three times in total, the other occasions being my Jorge Campos illustration in 2013 and a mention in their regular ‘Back of the Net’ section. I recently visited the team at their Head Office in Manchester and got to meet a few of the designers responsible for this iconic brand. 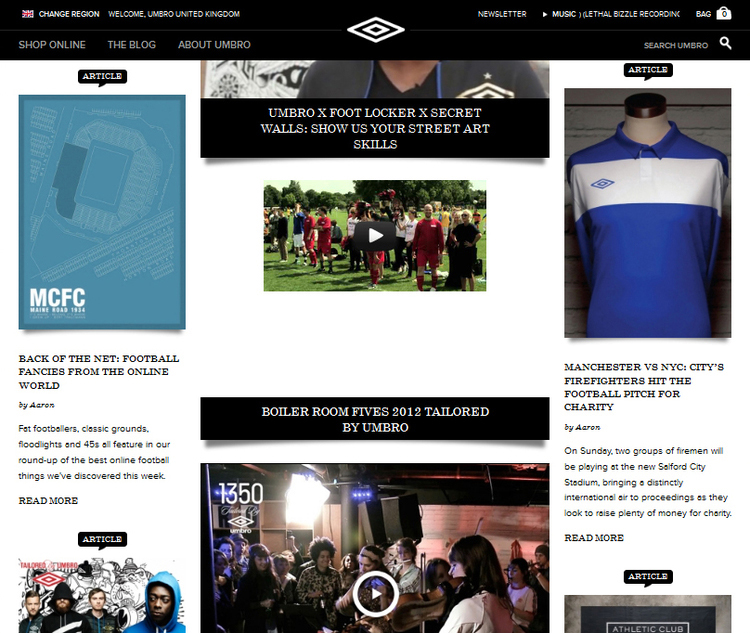 One of my prints (Ayresome Park) is currently on display at The National Football Museum. It is being used to commemorate the work of acclaimed Engineer and Architect Archibald Leitch, ‘Archie’ was not only responsible for the design of Middlesbrough’s former home but also many other iconic 20th Century football grounds, his book ‘Engineering Archie’ is well worth a read. 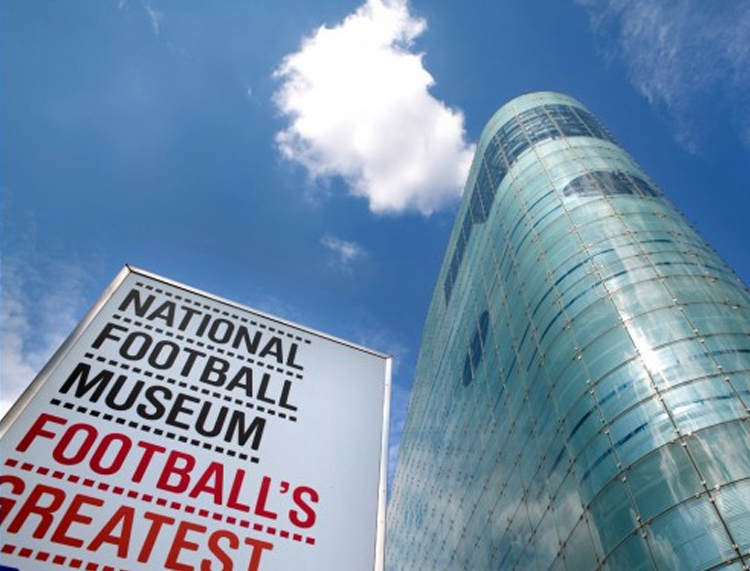 One of my primary goals when starting these illustrations was to try and force my way on to the pages of Four Four Two magazine. To have achieved this goal on three separate occasions has been massive coup for me, even culminating in a selection of my work being featured on their office walls. One of my favourite bits of product placement to date was when magazine editor David Hall surprised me by wearing a miniboro t-shirt (Cruyff) as part of his intro to the August 2012 issue. 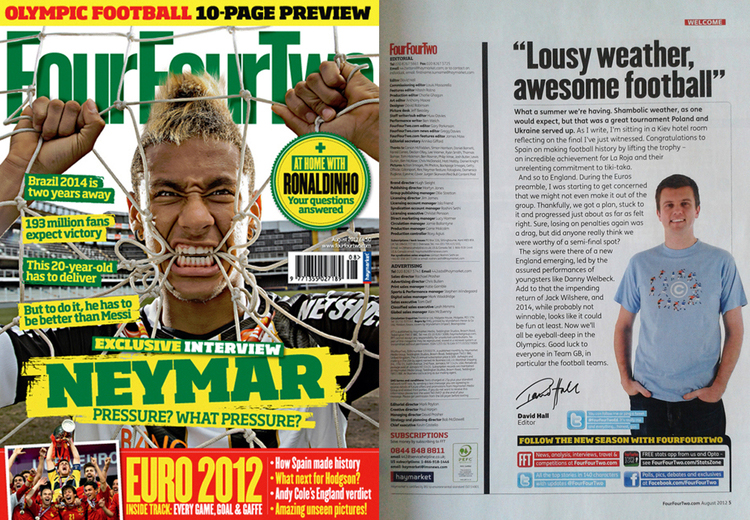 As endorsements go I’m not sure I’ll ever to top this one… Dutch legend Edgar Davids decided to get in touch to say he’d enjoyed an illustration of mine that referenced his ‘Piranha’ nickname. He asked if I had plans to do do any more, perhaps incorporating his more well known nickname of Pitbull. I went on to produce another four pieces and Edgar was kind enough to feature them on his official website / give them a mention etc. 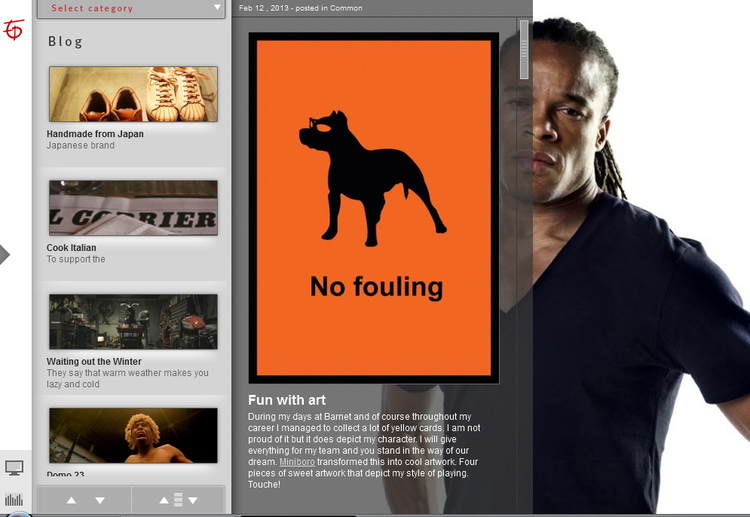 In Bed With Maradona (IBWM) is a collection of the best writers, artists and photographers who work with football as their inspiration. ‘The First Two Years’ is a collection of 26 articles from such luminaries as Ian Macintosh, Andi Thomas, Dan Brennan, Juliet Jacques, Sam Kelly, Nick Miller and Jack Lang among others. Being asked to contribute to such a significant title was a great moment for me – one that was perfectly summed up by Stuart Fuller’s own review of the book, in which he states:

When judgement day arrives for football journalism, there will be those who can put their hand up and say they were part of the revolution… and those who can not. 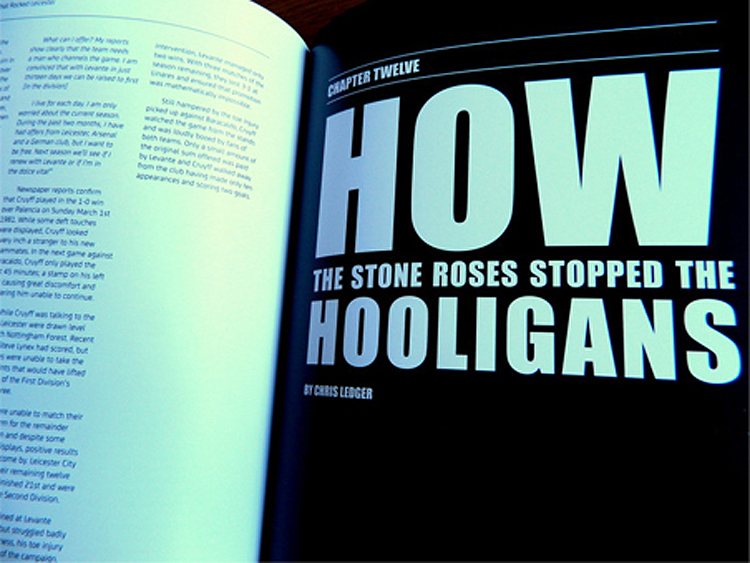 Women in Sport is a national monthly magazine that aims to cover all aspects of women in the sporting arena. My Hope Solo illustration featured on the back cover of their sample issue (August 2013) and was also included in their launch issue which hit the shops on October 24th. Freelance journalist Natasha Henry is the architect of the magazine and has assembled a strong team of writers that includes Olympic gold medal-winning heptathlete Denise Lewis. 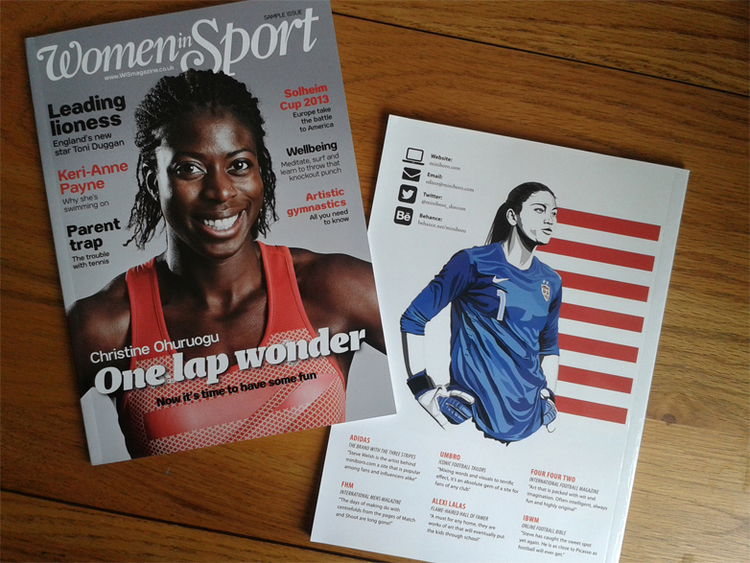 STAND is an award winning fanzine that gives the opportunity for like-minded people to take a considered look at the state of the game. They attempt to introduce and investigate alternatives to negative aspects of modern football and to bring together disaffected fans. Issue 4 saw my Enzo Francescoli print featured. 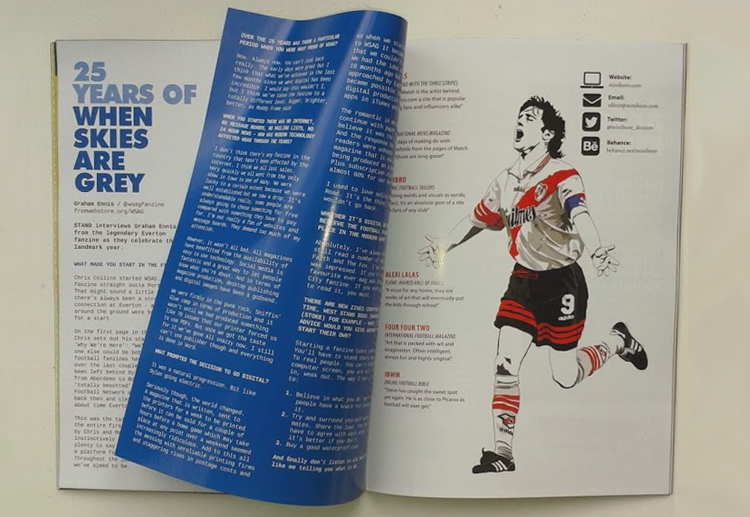 Founded in 2007 – It’s Nice That – is a publishing platform that encompasses several on-line, print and events offerings as part of a continuing mission to champion creativity across the art & design world. To see my work featured alongside heavyweights such as ‘Design by St’ and ‘The Times’ was a massive thrill, as was having my work discussed on their fortnightly ‘Studio Audience’ podcast. 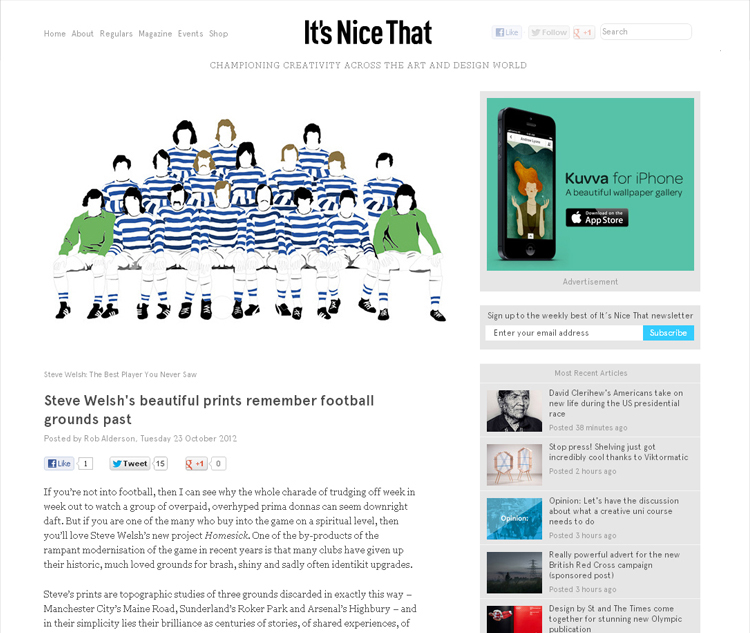 AIR Magazine is a monthly in-flight publication specifically crafted for Private Jet passengers in the Middle East. Their August 2012 issue featured an interview with football legend Pele alongside 3 of my illustrations in an article highlighting football art. 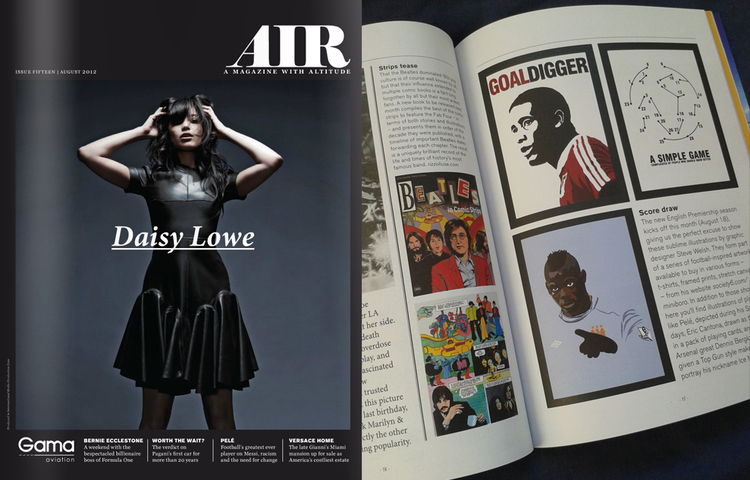 Sport Magazine is the most-read sport magazine in the UK with a weekly circulation of more than 300,000 and was the country’s first mass-distribution free magazine. Their ‘Knowledge’ section gave me a very generous full page spread in Sept 2011 which showcased some of my earliest illustrations. 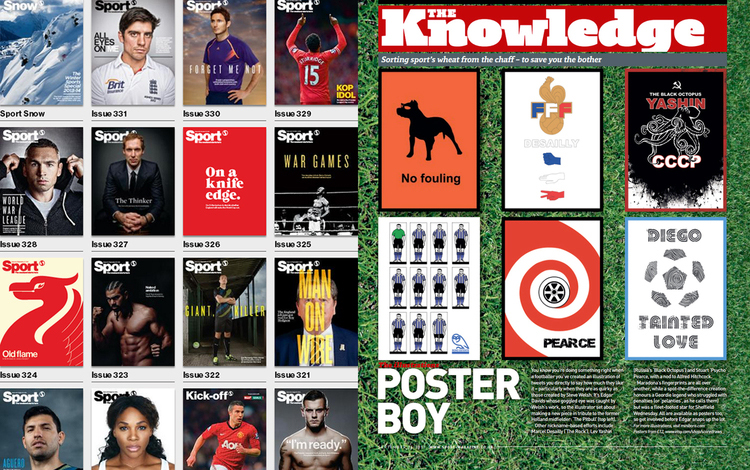 I was understandably chuffed when FHM decided to feature my work alongside 6 other talented artists. The article looked at the emerging trend for football art and picked their personal favorites. Some of the other artists chosen were Zoran Luci, Dan Leydon and fellow Boro fan Graeme Bandeira. 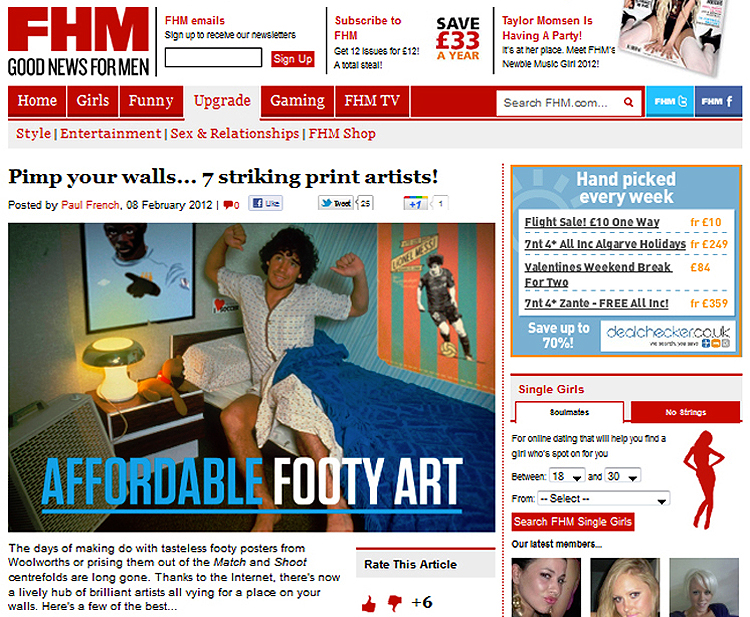 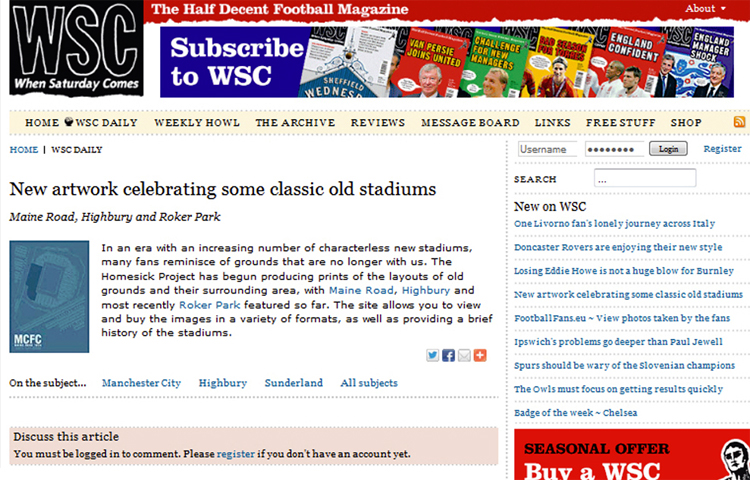 The Journal is a daily newspaper produced in Newcastle upon Tyne and published by ncjMedia (a division of Trinity Mirror). In 2013 they set out to find out who in the region is using social media to shape the future of the North East.The aim of the campaign was to see who has the greatest impact and capacity to influence, not just the decision makers in the region, but the men and women with their mobiles phones and iPads on the street. I’m pleased to say I was considered most ‘Most Influential’ in the ‘Retail Category (result shown below). 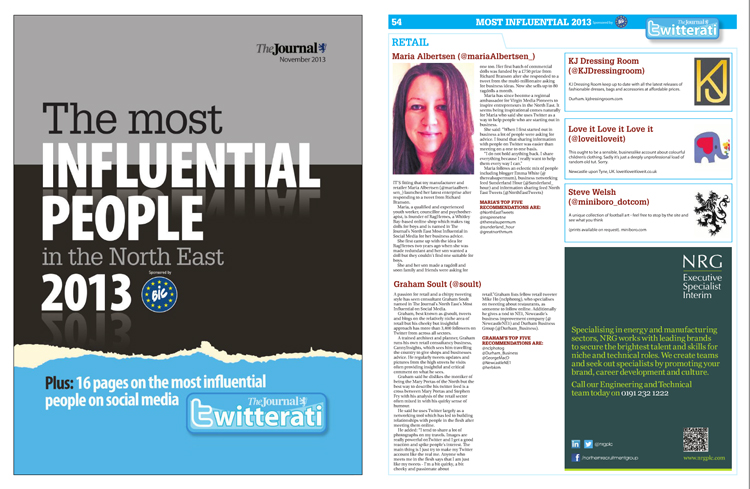