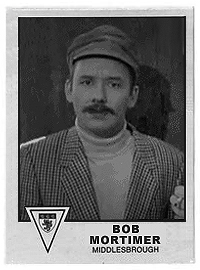 When I heard that a new series of Shooting Stars was to be aired last year, I thought it seemed like the perfect opportunity to catch up with long time comedy hero and long suffering Boro fan Bob Mortimer.

After a couple of false dawns (due to Bob’s workload / commitments) i’m happy to say I finally managed to catch up with him one Friday night.

I must say a huge thank you to Bob who was extremely generous with his time and also for putting up with my ‘just one more thing’ Columbo style of questioning.

1. You’ve seen a huge variety of Boro teams over the years, which one holds the most sentimental value for you and why?

The Hodgson, Johnston and Proctor years from the late 70’s with John Neal. Why? because those players loved the club. It wasn’t unusual to find Hodgson watching from the Holgate End if he wasn’t playing.

2.  I’ve heard you were a tricky right winger in your pomp and it’s well documented that you had trials for Middlesbrough FC. What’s probably less well known is that rheumatoid arthritis was one of the factors that stopped you taking up the sport professionally. Too what extent did it / does it still impact your comedy career.

My arthritis didn’t kick in till I was thirty…the reason I didn’t get taken on by Boro as an apprentice because I wasn’t good enough… In fact none of the Boro Boys from my years got signed up … a lad called Buster Loadwick got signed by Leeds but I think he only ever played a couple of games for them.

My arthritis doesn’t really effect me that much, I take pills.. and if they don’t work booze.

3. The clubs rebirth under Sir Bruce also coincided with your own reinvention as a comedian (Bob wrote his first material with Vic 25 years ago). What kind of impact did the ‘Class of 86’ have on you as a Boro exile at the time?

It was a good time to be a Boro fan… I never really made that many friends down south so my weekly trips to watch the Boro kept me going… If it wasn’t for those trips home I would have probably left London and never met Vic.

4. You’ve visited approx 70 away grounds following the Boro, which of those do you class as your best / worst away day experiences? Has your celebrity status ever got you into any bother at a game?

I really enjoyed our FA Cup 5 – 1 win at Swansea .. Cochrane scored a sweet overhead kick which I think might be the only Boro goal to ever make goal of the month.

5. Last season Mogga likened the rebuilding process at Boro to pruning a tree, suggesting the squad needs to be cut back in order to encourage new growth. Are there any parallels to be drawn from your own decision to do ‘Afternoon Delights’ i.e. putting the focus back on stripped down sketches and getting back to your roots as it were?

It’s all about money… Needs must. Mogga would buy Neymar if he had the cash. Likewise we would make a movie if we had a Middle East backer.

6. How did ‘Middlesbrough 2 Aston Villa 1’ find its way on to the Wheel of Justice during Big Night Out? I’ve always assumed it was your own doing after the ZDS Northern Final First Leg, is that right or was there another reason for its inclusion?

It’s a result I feel very strongly about and really believe in…I was at Villa Park (it was the same week as the recording I think) it felt amazing… I love to win away at a night match.

7. Were you aware that sketches from ‘Big Night Out’ and ‘The Smell Of’ sometimes appeared as cartoon parodies in Boro Fanzine – FMTTM?

Example 2: You Would Not Believe

No I wasn’t … But we’re you aware that after the cup final against Chelsea I had a dance with Emerson at the evening do? When I asked him what went wrong he said “simple…. I’m shit!”

8. Do you think the Otis Reading and Marvin Gaye characters would have worked so well if it wasn’t for their Boro accents? How big a part do accents play when devising the characters for your shows? (the delivery of “its alright I do look a bit like a monkey” being a personal favourite of mine)

No… I honestly believe the Boro accent is the best accent for comedy…have you seen Teesside Tin Tin or Boro Riots on You Tube?… Without our accents we (Vic and Bob) would never have made it… Wish more people from Boro would give it a go to be honest.

9. As both a fan and a former solicitor, what did you make of the legal wrangling that surrounded our 3pt deduction in 1997? / Were you tempted to step in at any point?

I have heard some very worrying stories about the 3 point affair. Suffice to say Mr Gibson is a saint and a gentleman

10. When asked about the commercial success of shows such as Catterick, you’ve said that “relative obscurity tends to suit us better” – Would you say the same is true of Boro as a football club? i.e. we tried to muscle in at the top table but our face didn’t fit?

No… I wish we were Champions of Europe

11. Morrissey is referenced in both Big Night Out and Catterick, whilst also idolised by Boro legend Bernie Slaven. How much truth is there in the rumour he took offence at his Consumer Monkey namesake?

He said it so I suppose it’s true…however he did invite us to his house for an evening so I think he liked the show. Later he sent me a book about Middlesbrough which he had signed, the inscription read “so this is where people like you come from”

12. I noticed in an interview with the Guardian that you once said of Twitter “I’ve never thought that anything I did was of any interest, so I’m not going start now” – What changed your mind?

I try not to tweet about things I do. Now that I’m on Twitter I realise that’s not what it’s about anyway, many of my followers are a right laugh.

13. I’d heard a rumour you were writing a novel with Charlie Higson? If so what can you tell us about it?

I am not writing a novel with Charlie, so I can’t tell you anything about it I’m afraid.

14. Finally one thing I’ve always wanted to ask… were ‘Le Corbussier et Papin’ ever considered for the Papa-Nicole Renault Clio advert you starred in?

No, the farting characters never really appealed to motorists or anyone else outside of France for that matter.