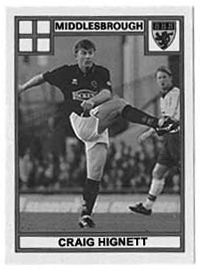 In the second of my exclusive interviews, I managed to catch up with Craig Hignett prior to his appearance at the forthcoming charity games for Gary Parkinson and Bobby Robson. I’d like to thank Craig for agreeing to speak to me during a very busy time for him and for the great memories he’s given Boro fans over the years. Enjoy the interview.

1. You came to us via the Dario Gradi school of excellence, what was the hardest lesson you had to learn whilst under his tutelage?

Put simply Dario taught me how to play the game. There weren’t any hard lessons to be learnt as such, he just made me aware of my strengths and my weaknesses, he also made me think about the game more.

2. What were your expectations when you joined the Boro?

To carry on learning at a higher level and see how far i could go in the game.

3. How did the reality compare to your expectations?

It was very different, the coaching virtually stopped and because we were in the Premier League you were automatically expected to know the game inside out. It’s difficult if you are a young player because the reality is that you are always learning and sometimes need help and advice.

4. What do you remember of your debut goal for the Boro?

Everything! I will always remember them because they were against my dads team…..Everton!

5. I’ve often wondered if you remembered your consolation goal against Villa in our 5-1 mauling at Villa Park? I was in the away end that day and things were so bad we just started cheering anything to keep our spirits up (throw-ins, corners etc) but then you popped up with a goal near the end and the stand went absolutely nuts.

I remember it well. I’d started the game as sub because Lenny had dropped me for the game. We got absolutely battered but the fans were brilliant.

6. I read somewhere that you consider the 1997 FA Cup Semi vs. Chesterfield as the best game you’ve ever played in. Is that still true today and if so what made it so special?

Yes it is. The game had everything, the sendings off, the underdogs taking the lead, the comeback, the goal that never was, penalties and a last gasp equaliser. I remember thinking to myself during the game “this must be a great game to watch”.

7. A Boro fan recently described it as a day of “delight tinged with guilt” how did the players see it?

We were glad to get out of there with a draw!!!

8. It’s fair to say that 1997 was a turbulent year, including our infamous 3 point deduction. Looking at recent events, how do you view the punishments doled out to other clubs (West Ham, QPR) when compared to how we were treated back then?

There has certainly been a lack of consistency regarding the punishments that have / have not been dished out. Looking back though i think we were dealt with very badly.

9. You’ve previously cited Barnsley’s defeat in the play offs as “the biggest disappointment of your career” – how did it compare with missing out on the Coca Cola Cup Final?

No comparison. I was disappointed missing out on the final but to miss out on promotion to the Premier League at Wembley was devastating. I would have loved to have been promoted with Barnsley, its a great club but i knew if we didn’t win promotion i would probably be leaving as Dave Basset (top man) would want the cash to rebuild.

10. Since Gazza was the man who ultimately replaced you at the club, how would you describe your relationship for the remainder of your time at the club?

I roomed with Gazza, he was brilliant and i got on great with him. He actually came to my room before the cup final to say he didn’t want to play; he is a very generous man and was loved by everyone.

11. What was your reaction to the 40,000 fans who signed a petition to keep you on as a Boro player?

I was amazed that people would go to those lengths for me. It was unbelievable really and i was very touched by it.

12. Despite your close links to the Boro and the number of clubs you’ve played for, you still seem to be universally liked where ever you have played. Do you think this is a reflection on Craig Hignett the player or Craig Hignett the person?

I would like to think it was a bit of both really, i have always tried to give 100% on the pitch and be myself off it.

13. Returning to your Riverside adventure, reports of Emerson going AWOL have been well documented over the years but how accurate were they?

He did go AWOL for a couple of weeks around the time we played Derby in the FA cup, you can draw your own conclusions but it also coincided with the Rio Carnival!

14. How did that play out in the dressing room?

The team spirit wasn’t really affected because it wasn’t that great anyway.

15. Had there not been such an intense media circus surrounding the club, do you think our time in Premiership would have lasted longer?

I don’t think it had any affect on our stay in the Premier League. We’d already done enough to stay up, it was only the 3pt deduction that took us down.

16. Are you able to shed any light on the whole Cox vs. Ravanelli dust-up on the morning of the Cup Final?

I think there was always some tension around those two, it was only handbags really but still shouldn’t have happened that day!

17. What was your initial reaction to the following quote – “My target is definitely to manage a club like Boro. It would be great if my dream came true” – Fabrizio Ravanelli

It will never happen!!!

18. Given the huge amounts of money that were thrown around during the Robson era, we could have probably signed 3 or 4 players for every 1 who came through the door. If you were given the reins which players would you have added to that squad and why?

Tough question, I really couldn’t say, especially as we could have taken our pick of anyone. If only it was like that now!

19. From our emerging Boro youngsters, who is the next Craig Hignett?

Hopefully they will be better than me! We do have 5 or 6 who are very promising and fingers crossed they will continue to develop and improve but for their sake im not going to name them!

20. Your dad previously played for Tranmere Rovers, who would you say was the better player in their prime, you or him?

I would like to think i was! Sorry dad…..

21. Do you still visit Tommy’s Chinese Takeaway at Norton? If so what do you recommend?

No, have to watch my waist now i’m retired!

22. Another ex-Boro boy (John Hendrie) went on to sign you for Barnsley. Do you have a favourite story from your time together that you could share with us?

Too many i’m afraid, I still see John and if i told you my Hendrie stories i might get a solicitors letter through the post!

23. You’re playing in both upcoming charity matches at the Riverside, what message do you have for any fan still in two minds whether to attend or not?

Just go, there will be lots of great ex Boro players there and hopefully 1 or 2 special guests. It’s also for a great lad in Gary Parkinson so we want to raise a lot of money to help him and his family.

24. One final question, a friend of mine wanted me to ask (and i quote) – “How much do you remember of the promotion party at the Dickens Inn 1995 and do you still enjoy the occasional bottle of Hooch?”

Ha ha, not a lot! and ive never touched a bottle of Hooch since!