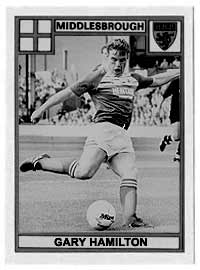 My series of exclusive interviews continues with Boro Legend Gary Hamilton. I caught up with ‘Hammy’ at his home in the US and he was generous enough to spare some time to reminisce about his time at the Boro, his career ending knee injury and his hopes for the future. Hope you enjoy the interview, i have promised i will feedback any comments to Gary directly so feel free leave a message at the foot of the article.

1. You began your Boro career as a 17 year old apprentice, who did you look up to at the time and what were your expectations coming into the team?

When I came in Bobby Murdoch was the gaffer, so being Scottish helped as there were a few lads from north of the border in his team. Tony McAndrew was one of the lads I looked up to and I’d also have to say Heine Otto, I thought he was a great player. My immediate expectation was “don’t f**k up and you’ll probably stay in the team”. When you’re young the crowd are defiantly a lot easier on you.

2. Willie Maddren decided to put you on the transfer list in 85-86, what did you make of that decision at the time / how did it affect you personally?

At the time I thought I was playing well, I can’t really recall what happened but I know we fell out about something. I think I lost my place in the team and went and told him my feelings on the matter. On reflection it was the wrong thing to do, I learnt very quickly that nobody is bigger than the club. Willie and I got on very well though, I must say that.

3. More uncertainty followed with liquidation, what was your reaction to the likes of Peter Beagrie turning his back on the club? I often wondered if it galvanised the remaining players to a certain extent.

Peter was just looking after himself and there’s nothing really wrong in that. We were close friends and he honestly thought his career would move forward if he left. To be fair it did but then so did ours, it was because he was a local lad that the punters were against him, and I can’t blame them for that either.

4. Lennie Lawrence had £150,000 deal lined up for you at Charlton. What was the deciding factor that made you stay?

I really was very close to moving to London, I thought it was in the bag and that I was heading out the door. I don’t really know, something in my heart told me to stay put at the last minute and that’s exactly how it happened.

5. Legend has it that Brucie twisted your arm over a farewell pint or two; can you shed any light on that story for us?

Bruce and I having a pint together? Well I like a drink but Brucie doesn’t at all, so that will only ever happen in Heaven. No truth to that at all.

6. You went on to form an integral part of the team and became synonymous with the play-off games against Bradford. A friend of mine has always wanted to ask “were you worried about getting tangled up in the bog roll when you scored that decisive goal in front of the Holgate?”

I’m sure it went in off the bog roll, although I didn’t really notice it until I seen it on TV. If you remember the little dance I did, I’d had a bet with my pal that if I scored the winner I would do some kind of silly dance. So that explains that because my kids have often asked me that question.

7. Continuing with a toilet based theme for a moment, did you ever see this cartoon which appeared in a very early issue of FMTTM? How aware were the players of the fanzine at the time, did you ever read it etc?

Very aware, I bought it before every game. I use to love it when it took the piss out of the lads. I don’t care what any player says, they always want to know what the fans ‘really’ think about them and FMTTM was brutal sometimes. I would bring it into the dressing room and show the lads.

8. Issue 11 of the fanzine ran an article that stated “More than any other player Hammy has made the step up to become a 1st Division player, competing with and bettering the McMahons and Hurlocks of this world. He has played in the true Boro spirit, committed but not dirty and using skill rather than force to better his opponents.” – Does that match your own assessment of how you played that season?

Yes I would have to agree with that. I really don’t think I was a dirty player at all. I was just prepared to do whatever it took to WIN. 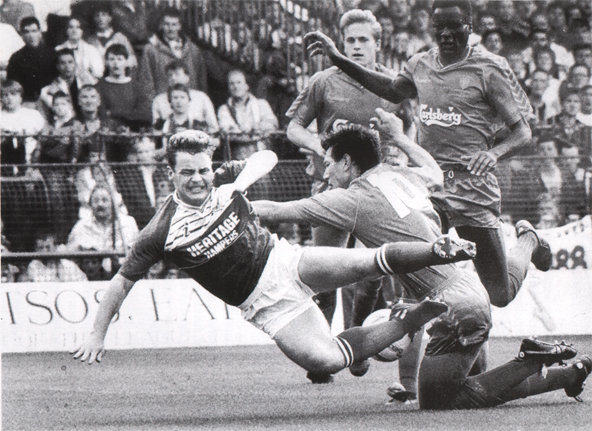 9. What sort of impact did relegation have on you?

Terrible, plus I feared the worst with my knee, I really enjoyed being in Division One and personally I think that’s where we belonged. So it’s not too far from the truth to say I was crushed.

10. Do you think you played on for too long whilst carrying injuries?

It was no one else’s decision apart from my own. I made all of the decisions when it came to playing. Many people believe I was forced… but that was NEVER the case.

11. How often did you need pain killing injections towards the end of that season?

Never had painkillers… did have to get my knee drained every other week though, which believe me was a painful experience every single time.

12. Was your career ending injury down to one bad tackle? Or was it the result of a number of crunching 50/50’s over the years?

Actually it was a genetic disease in my knee, inherited from my grandmother I believe. There was just nothing they could really do for it back then.

13. During your rehabilitation, how close did you come to playing first team football for the Boro again?

I actually got back to being named in the squad for a home game v Man City, think it was late 90-91 season. I was about 80% back but couldn’t get beyond that.

14. What was the most frustrating part of that process?

Not being able to play, simple as that… I was born to play. I hated it so much; it drove me to depression sometimes.

15. At what point did you know your career was over?

It was a cold Wednesday night at Port Vale, just before the Man City game. Some little 17 year old hit me from behind. Sadly, I knew exactly then.

16. Could you talk us through the emotions you felt on the day of your Testimonial?

Excited and disappointed as I knew that was me and my Boro days over with.

17. After your enforced retirement you had a spell working with Boro’s Academy, was that something you’d always considered or was it a suggestion made to you?

It was a suggestion made to me by Bruce when I first got injured. I didn’t really fancy it as all I wanted to do was play… thank the lord I took him up on it now.

18. What made you opt for the States rather than staying put? (Gary currently runs Houston Dynamo Juniors & Academy in McAllen, Texas)

I just came out for football camps first. To be honest I also think it was to get away and figure out what the hell I was going to do. One thing lead to another and I’m very thankful for how everything has turned out for me. I must also say that I work how I played. Very Hard 7 days a week.

19. I recently interviewed Mark Burke, he said that during training you would “tackle people with your whole body” and he would be left thinking “how does he do that?” Is that a technique you’ve been able to pass on, or is it a Hammy trade secret?

Don’t think it was a secret, I just wanted the ball and if you were in my way then sorry! I used to love to watch Burky in motion with the ball…… I was so jealous.

20. How closely do you follow the Boro these days?

I’ve always followed them really but I’ve become a huge fan all over again since Mogga’s arrival.

21. Before Mogga’s appointment your daughter ran a Facebook campaign championing you to become the next Boro manager. Were you surprised at the level of support you received, and the depth of feeling people still have for the class of 86?

After coming back for the Parky benefit dinner I was completely overwhelmed at the level of support from the fans, must say it was a great feeling. The Facebook campaign was just to get my name back out there; I never thought it would go as far as it did.

22. If Mogga asked you to join him at Boro what would you say?

YES… without a doubt… I would leave everything I have done here in the States, which is a lot, in order to work with Mogga. I’m trying every day.

23. You’ve previously said of Bruce Rioch “he made me the man I am today, and I will be grateful to him for the rest of my life” Do you have a favourite Sir Bruce story you can share with us?

He has absolutely made me the person I am today, I truly believe that. A favourite story? Wow there’s so many. Best one was when he made us bet on ourselves to win the playoffs, which we all found very strange as he hated us gambling. So we all put up about £200 each I think, the club matched it and we had odds of 5/1 I think. When we beat Chelsea everyone had forgotten about it, but then Bruce came on the bus and emptied all these bags of money on to our card table, this was just before we flew out here to the States. That was just one of his strokes of genius, making us bet on ourselves even though it was against his beliefs. But it got us fired up that’s for sure, especially as we were feeling sorry for ourselves after the last game of the season that knocked us into the playoffs.

24. I wanted to finish the interview with one last piece of writing that appeared in FMTTM. Thanks for agreeing to talk to me and hope to see you back at the Boro sometime soon.

Hammy was a hell of a player with two great feet but only one great knee. On the pitch he never gave in, whatever the odds. In the end it was quite possibly his downfall, but he never once cheated us and for that we will always be grateful. Good lucky Hammy

Steve, thank you for giving me the opportunity to speak out for the first time about my time at Boro… times that will always be truly treasured.

UP THE BORO
HAMMY