Posted by steve.welsh@gmail.com in The Awful Truth On May 22 2014

One of the games I have been desperate to feature as part of my ‘Awful Truth’ series is the promotion decider that occurred between Middlesbrough and Leicester City in 1988. With it being such a significant game in MFC history, I was particularly pleased that Gary Silke, author of the outstanding Got Not Got, agreed to give his own thoughts on that eventful day.

City’s recent win up at Middlesbrough took me back to May 1988 – which was the last time we brought all three points’ home from Teesside but in quite different circumstances. Of course that fixture wasn’t played at the brand spanking new, state-of-the-art, Cellnet Riverside Stadium. No, it was played at a bit of a toilet by the name of Ayresome Park, which I doubt was considered state-of-the-art even when Queen Victoria was on the throne.

It was no workaday fixture in the depths of winter either, it was a glamorous end of season promotion game (or so Boro thought it would be anyway) played out on a hot and sunny afternoon in May.

Despite City lying halfway down the old Division Two, us City fans were all feeling a bit chipper. Now this next statement may require a quantum leap of the imagination but David Pleat was our manager and we were glad of it. He had arrived at Christmas; gradually lifted us clear of any relegation dogfight unpleasantness; and got the team playing some delightful passing football. Patrick Barclay even wrote in The Independent”

Things are looking up at Leicester, where David Pleat has got the players passing and enjoying themselves. Already fear of relegation has been replaced by optimism that next season will bring serious contention for a return to the first.

Applause kept warming the rafters of the main stand, Peter Wier was a delight beating men in twos and threes, curling crosses and generally suggesting that the turnstiles will soon recoup his £90.000 fee. By the time we went up to Middlesbrough for the final game of the season Pleat’s Leicester had won nine matches, drawn six and lost only three. We didn’t really expect to beat a strong Boro side and make it (10 wins and Boro didn’t expect us to either.

A win would have given the Teessiders automatic promotion ahead of Villa and the tannoy man before the game tempted fate when the tinny, crackling message announced.

Do not come onto the pitch at the end of the game, there will be a lap of honour if you remain OFF the pitch…

City that is, Cooper, Mauchlen , Morgan. Osman, Walsh, Ramsey, McAllister, Cross, Newell. Turner & Weir were superb. McAllister was at his cultured best. Mauchlen terrorised the midfield and Weir, as graceful as a swan down the left, hit City’s first in only the twelfth minute. City continued to show Boro how it was done, as we in the small visitors corner soaked up the sun and day dreamed of how we would take the division by storm next season

In the 56th minute Gary Mac made it 2-0 with a twenty-five yard screamer into Stephen Pears top right hand corner and you could have cut the silence with a knife. Even when Bernie Slaven pulled one back for the promotion ‘increasingly-not-so-hopefuls’ seven minutes later, it was clearly yards offside. No Boro fan could disagree that the better team won when the ref blew his whistle to bring to an end a fine exhibition of football from Pleat’s side. The few hundred of us in the corner felt very proud of the display, and the team were given a rousing send-off as they went down the tunnel.

But the Boro fans, now facing Bradford in the play-offs were feeling – to borrow a quote from Pulp Fiction “Pretty f#cking far from okay”. They were grimacing at us and waving their fists. They weren’t just angry in a normal hooligan showy kind of way; they were absolutely and genuinely incensed. These were the type of people who wear t-shirts in January, and clean their teeth with Bic razors and our unexpected (not to say unnecessary) victory had royally pissed them off.

I can’t actually confirm that the first City fan who poked his head out looked both ways up and down the street, but I bet he did.

It was clear, and we got back to the car okay, some City fans weren’t so lucky though and there were thirteen arrests as the police raced around trying to round up hordes of Boro hoolies hell bent on revenge. On the way home we were already looking forward to next season when surely no one could stand in the way of David Pleat’s Blue & White Army?

If someone had told us that we had just witnessed the peak of Pleat’s Filbert Street career the mood in the car might not have been so good. It’s funny how things turn out sometimes.

Footnote: This article first appeared in Leicester City fanzine The Fox, here’s how the original looked. Also here’s the extended highlights of the game itself 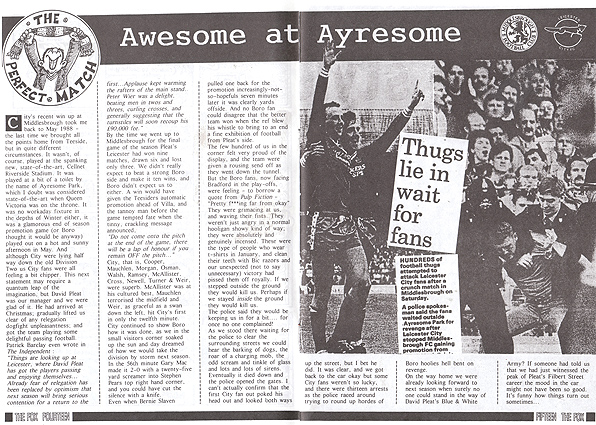